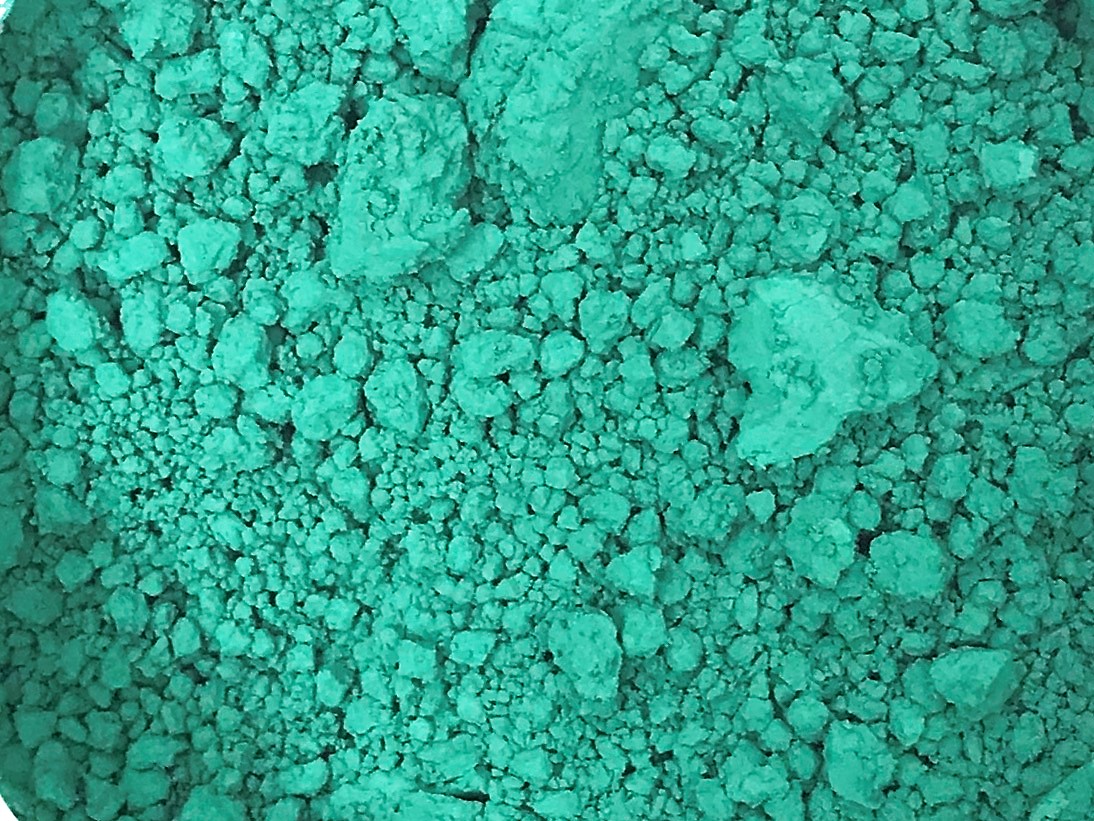 In the spooky history of pigments there is a gallery of rogue pigments known not just for their beauty but because of their ill effects to health. Two culprits include Scheele’s Green and Paris Green discontinued at the end of the 19th century and replaced by Cobalt Green. Scheele’s Green, also known as Schloss Green, was invented in 1775 by Carl Wilhelm Scheele; a German-Swedish scientist who created this pigment by combining sodium arsenite and copper sulphate solutions to make Cupric Hydrogen Arsenic. At the time the dangers of arsenic were not known – and, worse still – Scheele’s Green proved to be a very unstable pigment that was used in many household items such as wallpaper, candles, children toys and even food colouring. Scheele’s Green was cheap and easy to produce and soon became the green of choice replacing other greens that were in fashion at the time.

Despite factory workers often becoming ill, women in green dresses fainting and rooms painted with this colour remaining mysteriously bug free, its danger was unknown and its use was widespread – there are even links between Scheele’s Green and Napoleon’s death: She story goes that in 1815 whilst in exile in the Island of St. Helena, Napoleon’s favourite colour was green and the rooms in Longwood House where he stayed were adorned with green wallpaper containing copper arsenite – Scheele’s Green. Napoleon was rumoured to enjoy long baths, and the bathroom in Longwood House was no exception and painted in this colour throughout. As Napoleon wrote his memoirs, a book on Julius Caesar, and reminisced on his campaigns, his demise and ‘Waterloo’, he would have unwittingly inhaled poison as it emanated in his bathroom; the temperature and humidity infusing the Scheele’s Green into a deadly cocktail.

In 1822 a report published the composition and chemical ingredients of Scheele’s Green and by the end of the 19th century its use as a pigment and dye had been thankfully discontinued. It’s unfortunate that Carl Wilhelm Scheele will remain forever associated with these horror stories as he was in fact a great scientist who first discovered Oxygen in 1771 and is credited for discovering other chemical elements such as Barium (1772), Manganese (1774) and Tungsten (1781).

Today scientists and chemists ensure to make the use of dyes and pigments safer than ever, but in the words of Breaking Bad’s Walter White, “the chemistry must be respected” and it’s important to exercise caution. Whilst photographs of artists smoking in their studios – or chewing brush handles which hang out of their mouths make good historical pictures – both practices should be frowned upon when mixing paints or using solvents. There have also been concerns of heavy metals feeding back into the food chain and water, so in response to this, a new 21st century pigment has been created with the first Cadmium-Free range of colours launched by Liquitex and Winsor and Newton. Cadmium-Free Red, Yellow and Orange are not ‘Hues’ (a blend or substitute mix of pigments that approximates an ‘original’ colour), but a totally new innovative pigment that behaves and resembles these original Cadmium colours.